The “PageObjects“ are introduced mainly to avoid duplicated codes in test and simplify the maintenance works as well. PageObject just models the WebUI under test and represent the state transition among UI(page) activities.

PageObjects and Page Factory Pattern are terms from Selenium documents. The concepts of PageObject and (w/ or w/o) Page Factory are also derived from general OOD. It could be regarded as a much simplified ORM or a simple DAO if we regard test cases as data, test scenario pattern as DB tables. So the methodology can apply to other tests besides web.

A rough mapping could describe the concept easilier:

Based on project experiences, PageObjects offers below three functions to automation:

It can be utilized to design test suppport classes for database, CLI (especially tree view cli), interactive shell and desktop applications. The key is to design abstract objects to represent the internal relationships between states and adjunct methods to fetch/operate the POI(points of interests, I borrowed this concept from MapSys design).

Therefore, the PageObjects here formed a layer to separate test logics and supporting objects. When people are drafting tests, we don’t need to switch to OOD part to spend time “thinking” about how to implement it and finally find out we forget the original motivation or target to do. This makes a concentration.

it’s not always a pattern that teams feel comfortable following.

Alternatively there is Bot Style in test and test automation. Following PageObjects style, one turns to draw a state transition map on paper or in mind, no matter it is automation or manual test. For Bot Stylte, the test is designed against action steps (user scenarios). It is not to see which style is “better” in a quick glance. Here I am trying to provide some tips on finding the correct technique within the project characters and constrains. Usualy no matter in manual or automation, Bot Style is the first technique to utilize at beginning to get more domain knowledge while doing sanity test. Bot Style focus on the encapsulation of interactive actions so it is consistent to the test description on test plan or user manual. 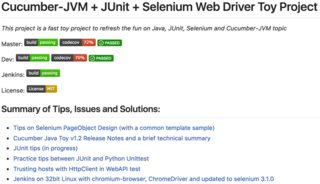 The target of this demo project is to show and refresh a general approach of BDD and experience the Gherkin specs as a communication tool on story definition and how to map it to JUnit case scope. It started on Monday from scratch and baselined Friday morning on schedule. Crtitial issues resolved were recorded on Github issue board, too. I recorded hints and tips in the readme markdown page. Here is a paper of note about the thoughts captured during the fast adaption phase.

There is another post about tips on PageObject design in web testing. This post is on general practice with Gherkin spec and JUnit. 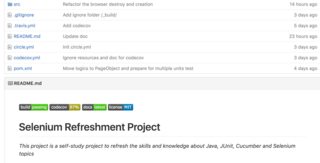 April 25, 2017: The same defect is found on Air New Zealand Career Board. With a quick study, the resources point to a company named “Snaphire” (resource name is com.snaphire.wicket.*). It seems the typo is with common template by Snaphire for both the two NZ government web sites.

This post is about human interface defect instead of codes or automation as usual. Couple of real world defects are discovered on web services with local business. It might be an indicator of demand on QA engineering, both automation and manual test. At least of a pattern is discovered, for example typo, it is easy to code the pattern of spelling check and word similarity calculation with basic NLP in Python or Java.

When I was querying nearby Gym on snapfitness website, it targeted to an HTTP 404 page. As an automation test analyst, I wrote a letter to the webmaster with analysis pointing to backend RESTful API defect and hope it will help :_)

Note that this defect only happens with snapfitness.com, another domain snapfitness247.con.nzis still working fine to return correct JSON data on POST Web API call (thru postman).

A scenario which is in sunny day for a while but turns to rainy day in another while or another day. This scenario is also called blinking story/test. A more formal term, occassional failure. They all refer to this kind of issue.

It is quite important to resolve blinking scenarios because the issue is destorying the trust in automation. Without a full trust on automation, CI and further migration is still a dream.

Yes, we are talking about the three dimensions again. Logic(scope/concept/recognition), Space (leak/id/dirty/init/clean/oversize) and Time (racing/history/cache/lifetime/frequency/multithreading) are still the three friends for software engineers to think about in typical tough moment.

It is a corrigendum on AWS official online documents in mainly for the translated documents in Chinese language. The list was firstly collected when I was quickly searching for some information during AWS studying but found the information was obsoleted. Would keep it updated and maintained lively.

LinkedIn and Github links are available on this blog left navigation bar.

Max is a software engineer in automation test area with development background, especially on Linux platform.

As an automation test engineer, I have worked with Cucumber-JVM + JUnit + Selenium in Java and Robot Framework + Selenium + customized keyword lib in Python.
In those projects, I participated System Integration Test and Third Party Acceptance Test over several interfaces as CLI, Web Driver, RESTful and proprietary device protocols. As for Web testing, I have designed Page Objects and also Bot Style automation libraries to support the different test strategies. I also got Java programming and SQL experiences from the previous development work on security message gateway products. I set up the first Jenkins node to support building CI infrastructure for our team. The automation test cluster was built with vSphere environment. Meanwhile, my personal open source projects are migrated to Travis and Circle with Maven and JUnit. I keep the self-learning on test theories, programming skills and AWS technologies in off hours.

In summary, I would like to highlight three points: the hands on skills on test automation, proven fast learning record and strong problem resolving ability.